City As A Spaceship (CAAS) is a new way of thinking about humans and their relationships with their habitats, transporters and their environment, an intelligent way of designing future cities, such that each city can be composed of small, spaceship like closed-loop eco-systems where most resources the city consumes, are produced locally, in-situ, leveraging the power of technology to reap efficiencies through sub-systems that plug into mega grids, to share excesses, while not sacrificing self-sufficiency, or the ability to decouple from ‘the city’ in the event of a crisis. Most things these eco-systems spit out as waste gets recycled back in. This urban philosophy can lead to the design of future cities that could exemplify what Buckminster Fuller meant with “Spaceship Earth”. CAAS believes in Earth and (Outer) Space as a single cosmic continuum. In this view of the universe, the idea of living in the challenging environment of outer space serves as a metaphor for life in modern cities – dense living in confined spaces, closed-loop systems, recycling of resources, energy efficiency and more.
Instagram: @cityasaspaceship

Rohini Devasher is an artist and amateur astronomer. Her films, prints, sounds, drawings, mappings the antagonism of time and space; walking the fine line between wonder and the uncanny, foregrounding the ‘strangeness’ of encountering, observing and recording both environment and experience. In August 2021, Devasher and Pallavi Paul co-founded Splice, an artistic and curatorial collaborative practice.
Instagram: @rohinidevasher @_s_p_l_i_c_e_

Susmita Mohanty is a spaceship designer and entrepreneur extraordinaire. She has co-founded space companies on three different continents: EARTH2ORBIT (2009-2021), Bangalore, LIQUIFER Space Systems (2005-present), Vienna, and MOONFRONT (2001-2007), San Francisco. Prior to turning entrepreneur, she worked for the International Space Station Program at Boeing in California and did a short stint at NASA Johnson. In Autumn 2021, she launched India’s first dedicated space think tank SPACESHIP SARABHAI. In 2019, Susmita was selected as one of BBC’s 100 Women laureates crafting a female-led future. In 2017, she was featured on the cover of Fortune Magazine. Educated in India, France, and Sweden, Susmita holds multiple degrees including a PhD. She is a member of the World Economic Forum Global Future Council for Space Technologies.
Instagram: @susmita_mohanty_suz
Twitter: @suz_moonwalker

Barbara Imhof
Barbara Imhof’s main work areas lie in space architecture and design research in the fields of integrating biological systems into architecture and the design of advanced systems for resource-constrained environments. Further research and design development focus on the design of minimal and transformable spaces and exploration of spatial implications of socio-psychological stressors in extreme environments. With her background in architecture and space studies she is working across disciplines and fields ranging from arts, architecture to science and design engineering. Imhof was brought up in a hybrid family of mountaineers on one side and northern coastal people on the other side. Thus she has a strong connection to extreme environments and a deep care for our planet.
Instagram: @barbara.imhof
Twitter: @BarbaraImhof3

Sue Fairburn
Sue works between the boundaries of the body, society, and the environment. Combining practice and research, she examines how extreme environments challenge our notion of survivability and response to the unfamiliar. Her interests bridge design and science and include scenario-based methodologies. Her core activity for the past 20-years is writing & delivering design-based curriculum for various disciplines, on design methods, research methods, design for extremes and cross-disciplinary working (UK and Canada + International workshops). She co-founded a social enterprise. Her work in social innovation is through projects engaging local communities in local issues and seeking relevance to global contexts. Raised on the dry prairies, and a fourth-generation farm owner, she is drawn to water in all its forms and has a deep connection to soil and growth. She swims wild whenever possible, in oceans, rivers, lakes/lochs, ponds and try to cultivate food wherever she lives.
Instagram: @granitegirl8
Twitter: @FairburnS 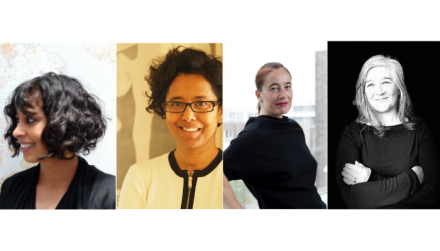